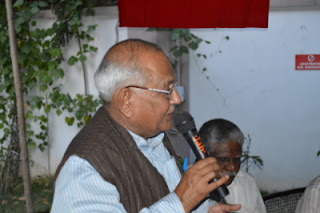 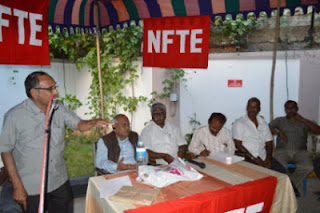 
Grand inauguration of 6th Membership verification campaign at Vellore by Com.Islam: Com. Islam, President, NFTE inaugurated the membership verification campaign of Vellore SSA with an emotive and fiery speech in which over 300 comrades including 50 ladies have participated. Com.Isalm touched upon the failures of BSNLEU in issues like protecting the interests / finances of BSNL, 78.2 IDA merger during 2nd PRC, Bonus, LTC, Medical allowance, interests of SC/ST employees in NEPP, Wage reduction of DR TTAs, etc. He elaborated on settlements of issues by NFTE like JTO LICE, Child care Leave, June 2012 agreement which formed the basis for 78.2, CCL, etc, New Recognition Rules, etc and the changed scenario due to the new BSNL Recogniton Rules and Council Rules. On behalf of NFTE he assured settlement of 78.2 IDA, benefits for SC/ST employees in NEPP, NEPP at par with Executives, Pension contribution issue, one day Spl.CL per month to women employees and steps to ensure financial viability of BSNL. He assured to fight and ward of the evil designs of BRPSE. Com Islam also exposed how BSNLEU failed to participate in many joint struggles including the one on Pension while NFTE never failed in joining strikes including the one in June 2012 which paved way for solving many crucial issues. He said the duty of a responsible Trade Union is to protect the employees which NFTE never forgot.

Com.Pattabhi elaborated on issues settled by Com.O.P.Gupta which transformed the life of Telecom employees by uplifting their status and wages while in service and protecting them after retirement by ensuring Government Pension. He also spoke about the failures of BSNLEU and issues which NFTE is committed to settle.
Com.Roberts, ACS, Coimbatore, Com.Murali, ACS., Chennai, Com.Paranthaman, DS, SNATTA, Vellore Com.G.Vasudevan, All India office bearer of Anna Union and Com.P.Kamaraj DS, Puducherry spoke on the need to make BSNLEU face its worst ever defeat and make NFTE the victorius Union in the ensuing verifcation
Posted by PATTABI WRITES at 5:53 PM 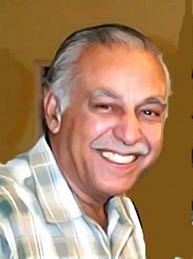